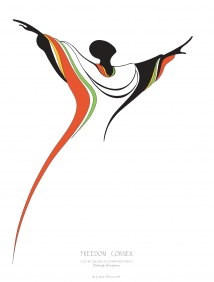 Inspired by the Hill District and forever humbled by this resilient community, I designed Pittsburgh's Freedom Corner Monument and sculpted the iconic art gracing it. My art style is urban realism inspired by the Lower Hill's destruction that, for the sake of one civic auditorium, uprooted 8000 mostly black families, including my own. That single societal event of the mid-1950s, equaling the devastation of the 1968 riots. Though motivated by the loss, my art is not a portrayal of the Hill District alone. Still, an artistic response to the Lower Hill's ruin entwined with my family surviving the vanquished neighborhood.

Decades later, I realize the larger story— particularly during the Crawford Roberts area demolition—the deserted structures reflecting the abandonment I experienced as a child, the sinuous architectural forms inferring instability, vulnerability.The people displaced—the nomadic lifestyle. The acute sense of loss carried home and into the darkroom essential to technique. Concentrating on what remained, I unconsciously exposed subjects no longer present—the people, the commerce—another part of the Hill gone.

I worked intuitively. Not always motivated by the Hill District, my love for drawing, painting, and photography was reason enough. For instance, a ragged blanket photographed in Manchester's nearly collapsed Jackson Hotel. I walked almost every room in sub-zero temperature—taking a picture being the last thing on my mind until discovering several rooms with people sleeping on cardboard beneath rag piles. As a tribute to them, I took a photograph of a rusted bed—the tattered bedspread laden with fallen plaster appearing to weep expressed the pity I felt for them. Only days later, I realized the solemn print exposed parts of my history too.

Now retired, Mr. Peterson is best known for designing Pittsburgh’s Freedom Corner Monument and sculpting the iconic art that graces it. Before starting his firm, Carlos F. Peterson Technical Art, Mr. Peterson was an architectural draftsman and award-winning illustrator in the steel engineering industry. In addition to national awards for technical art, he has won juror’s awards in numerous exhibitions throughout Pittsburgh and received purchase awards at the African American National Art Exhibition in Atlanta, Georgia.