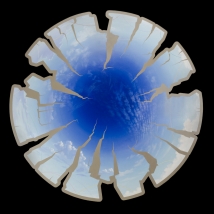 My recent work complicates the old idea of the natural sublime with the recognition of new kind of entanglement between mankind and nature.  My paintings are images of that complicated relationship.  I try to piece together ravishingly luminous and spatially contradictory places from memories of actual geographic locations, images from our shared cultural histories, scientific imagery, news photographs, etc.  In the gaps between these modes of representation, I hope to find images that are both beautiful and bewildering.

Clayton Merrell grew up in Pittsburgh, PA, and Puerto Ordaz, Venezuela. He studied painting and printmaking at the Yale School of Art, where he earned an MFA in 1995.  He was awarded a Fulbright Grant for research and creative work in Oaxaca, Mexico in 1996-97.  His work is exhibited widely, with recent exhibitions at: Slow Gallery, Chicago; the Smithsonian National Air and Space Museum, Washington DC; Concept Gallery, Pittsburgh PA; the A+D Gallery, Chicago; the Westmoreland Museum of Art, and the Chautauqua Institution, Chautauqua NY.  His work is in the collections of the American Embassy in Belmopan, Belize, the Smithsonian Museum and numerous private and corporate collections.  He was the 2005 Artist of the Year at The Pittsburgh Center for the Arts. He has received awards and grants from the Virginia Center for the Creative Arts, Skowhegan, The Millay Colony for the Arts, the Blue Mountain Center, the Vermont Studio Center, ProArts, Artists Image Resource, and the Center for the Arts in Society.  During 2004-05 he was a fellow at the Roswell Artist-In-Residence Foundation in Roswell, New Mexico.  In November of 2015, the Pittsburgh International Airport completed construction of a 69,000 square foot terrazzo floor image based on his design.  He is currently a Professor of Art at Carnegie Mellon University.  He lives in Pittsburgh with his wife and daughter.