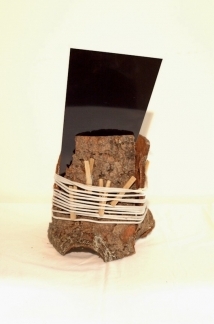 “Grotesquerie is a fact of life for certain classes, the wall paper for folks who dwell beneath a certain rung of the ladder… my people were West Virginia factory workers and, as such, were immersed in enough gothic absurdity to drown Flannery O’Connor.”

I was born in an area much like the one described in McLanahan’s book - a place called Maidsville, West Virginia. I remember it as a place both tedious and shocking that requires one to be a  jury rigger and masterful improviser. I come from a long line of them. My grandma was left alone to make repairs on the house after my grandpa was crushed to death in the coal mines. You could say that the way I make art is executed with the same urgency, indelicacy, defiance, and humor as Grandma Reese’s. If she was still alive, I think she would say “Derek’s artwork isn’t the prettiest thing you’d ever seen, but it’s damn sure something to look at.” I could have said the same thing about her house repairs.

I didn’t become a coal miner like my grandpa, dad and uncle, but a disregard for refinement was inherited. My art making process consists of finding ways for the maladroit structures that I create- these curious replicas of temporarily mended structures- to interact physically, or symbolically with my two-dimensional works. Employing materials and imagery inspired by my childhood home, the Appalachian region, and blue collar-ism, I make art that collides imagery and object, fuses cultural archetypes with stereotypes, and blends personal history with fiction which results in a certain type of  “grotesquerie”.

Grotesque and absurd, Scott McClanahan’s words used to describe his hometown, sum up the sentiment in my newest body of work. Left Virginia is a continuing collection of unconventional mixed media landscape paintings, sculpture, and assemblages which depict my interpretation of the ecologically and culturally devastating practice of mountaintop removal, or “strip mining” of the Appalachian Mountains in West Virginia. Objectively and aesthetically speaking, the process of removing a mountain is morbidly beautiful. As an artist, I can relate to the process of disposing of something inherently beautiful to get to the prize. It requires both brutal power and surgical precision. The lines and textures made from the explosions and machinery are wondrous and terrifying. This great process that we perform on ourselves, or at least allow to be performed is a cultural castration, resulting in a geographical and psychological bewilderment.

Derek Reese is a visual artist who was born in Morgantown, West Virginia in 1981. He is interested in a post-disciplinary approach to painting which involves an exploration of various media with painting as a jump off point. Reese’s artwork explores personal identity through materials and imagery inspired by his childhood home, the Appalachian region, and blue collar-ism.

Reese received his BFA from West Virginia University and completed an MFA from Ohio State University. In 2009 through 2010 he was an adjunct professor of art at Fairmont State University in Fairmont, West Virginia. In 2011, Reese crossed the Mason-Dixon Line in order to make art and teach in the burgeoning national art-city of Pittsburgh, PA. Reese exhibits his art work nationally, and has given guest artist lectures at Carnegie Mellon University and Penn State University. In 2011, he was the recipient of the Pittsburgh Pop-Up Grant creating installations in Pittsburgh’s Cultural District fusing visual art and music in collaboration with Pittsburgh’s Freya String Quartet. Currently, Reese is a 2014 fellow at Flight School, the professional development program for Pittsburgh artists at the Pittsburgh Center for the Arts.