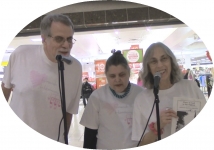 We sing for the camaraderie of working together and friendship through music.

That’s the mission of Friends in Harmony. Our mission is reflected in our name, where harmony in relationships is even more important than harmony in music.

For us, it’s not just about sharing music with others.  It’s also about passion for our project and making music for the joy of it, not primarily for money.

We sing an unconventional eclectic mix of all styles and all time periods, both a cappella and accompanied.

The founders, Sherry and her husband, Marty, have been singing together for three decades, both professionally and informally.  The current core group of three musicians have been together since 2000.

Sherry received an M.M. in Music Theory from Duquesne University in 1985.  She has sung alto in the Rodef Shalom junior choir, and the First United Methodist Church of Pittsburgh choir.  She was choir director at Mother of Good Counsel Roman Catholic Church and Concord Presbyterian Church.

Marty received an M.M. in Music Criticism at Duquesne in 1985.  He has sung baritone in the First United Methodist Church of Pittsburgh choir , Mother of Good Counsel Roman Catholic Church choir and Concord Presbyterian Church choir.  He was a classical music critic for the Pittsburgh Press and the Pittsburgh Tribune-Review.

Our soprano has sung first soprano in the Bach Choir, the Mendelssohn Choir, the Pittsburgh Camerata, the Pittsburgh Oratorio Society and the Latin- American Choir and the Community of  Reconciliation choir, and has been a Church Organist for 1 year.  She has taught music to children with learning disabilities and has taught piano. She is on the faculty at Calliope House for Elementary Voice.

We have performed at various assisted living facilities, and fairs and festivals and public venues, most notably the Pittsburgh Downtown Partnership, the Pittsburgh Public Market, the Bryant Street Festival and a number of public libraries.