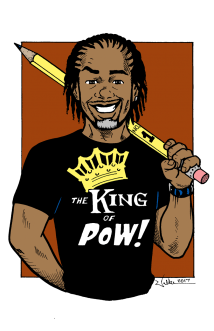 I am a visual artist working predominantly in the field of graphic-prose. I write and illustrate comic-books, both independently and with occassional collaborators. I would describe my visual art style as naturalistic and traditional, charged with a contemporary sensibility and sense of composition. I have self-published my own comic-books: SMOKING GUNS and HERO CORP., INTERNATIONAL, and am currently the Lead Artist & Project Manager on the comic-book series CHUTZ-POW! SUPERHEROES OF THE HOLOCAUST. My ultimate goal is professionally self-sustaining creativity, and I consider every project a part of that composition.

M.L. (Marcel Lamont) Walker is a Pittsburgh, Pennsylvania native who graduated from the Art Institute of Pittsburgh in 1989 after studying graphic design and visual communications. While creating freelance artwork, he also worked as an Art Instructor at the Pittsburgh Center for the Arts from 1993-1999. Walker is currently a board member at The ToonSeum, Pittsburgh's Museum of the Comic and Cartoon Arts. He has self-published HERO CORP., INTERNATIONAL, a limited-issue comic-book series focusing on corporate superheroes, and he is the lead artist and project manager of CHUTZ-POW! SUPERHEROES OF THE HOLOCAUST, a comic-book series published by The Holocaust Center of Pittsburgh. In 2017, he was the winner of The Pittsburgh City Paper's Reader's Poll for Best Local Cartoonist.