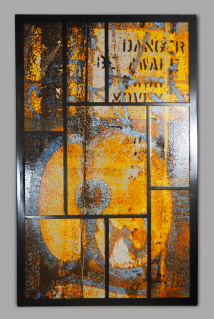 Pittsburgh’s manufacturing history and tradition of innovation has reawakened my admiration of the nineteenth century glassmakers such as René Lalique, Louis Comfort Tiffany, and Émile Gallé. In living and working here, I have become inspired by the juncture of functionality and elegance in the lighting, housewares, and architectural embellishments that these artists pioneered and is seen throughout the city and its environs. I see my work as emerging from this movement; my pieces are steeped in this tradition but are deeply influenced by technologies of the later 20th and early 21st centuries that incorporate new processes and materials. My Rust Belt Series of designs draws directly from my surroundings and experiences in and around Pittsburgh. The images in this series are mostly created from photographs of industrial and infrastructural spaces I encounter.

My glass work is primarily made with a newly developed process called powder printing. Powder printing with glass uses traditional screen printing methods, but replaces ink and paper with glass and heat. In this technique, images are produced by pressing dry glass powder through a prepared silkscreen directly onto layers of flat sheet glass that are then fused together in the kiln at temperatures over 1400 degrees fahrenheit.

My work in fused glass stems from a deep love of materials and techniques. I am also inspired by the technical processes and aesthetics of Japanese block printmaking and Buddhist and Navajo sand paintings, both of which are deceptively straightforward art forms. These artistic methods all share in common a complex process hidden behind a surface of apparent meditative simplicity. While the end results appear uncomplicated in themselves, the challenge of their mastery is staggering. It is this hidden relationship between composition and execution that I find so satisfying and try to replicate in my own work. I take found photos and reduce an image to its most essential, abstract elements. In so doing, I am able to stretch the limits of the naked eye, using the microscopic lens of digital drawing programs to play with the line between conceptual abstraction and concrete representation.

I have attempted to integrate these nuances between labored construction and perceived ease during my apprenticeships, throughout my creative and intellectual education, and in my current work as an artist. Recently, my emphasis on light has enriched these questions of complexity and simplicity. Although already at work in my smaller sculptures and glass wares, my recent interests in and emphasis on incorporating light has given my work a new dimension. The process of adding a lighting element to the glass has increased the technical complexity that I relish, and light’s ability to emphasize both the glass’s surface elements as well as its interior depth has allowed me to imagine my designs in an entirely new way. In this way, light indicates glass’s inherent complexities; it highlights the medium’s moments of opacity and translucence. In these new pieces, I am eager to emphasize how functionality enhances the artistic nature of interior objects instead of obfuscating it.

From the first time I pulled a gather of molten glass from a furnace in Santa Fe, New Mexico, I fell in love with glass and its potential as an artistic material. I apprenticed with several glass artists in the hot shops of Santa Fe, and eventually moved to the eastern U.S. to pursue an arts education. After earning my BFA in Studio Art at Carnegie Mellon University, I started Studio Glass Company in order to showcase and promote my kiln-formed glass designs.